Time to get the Calculators Out! 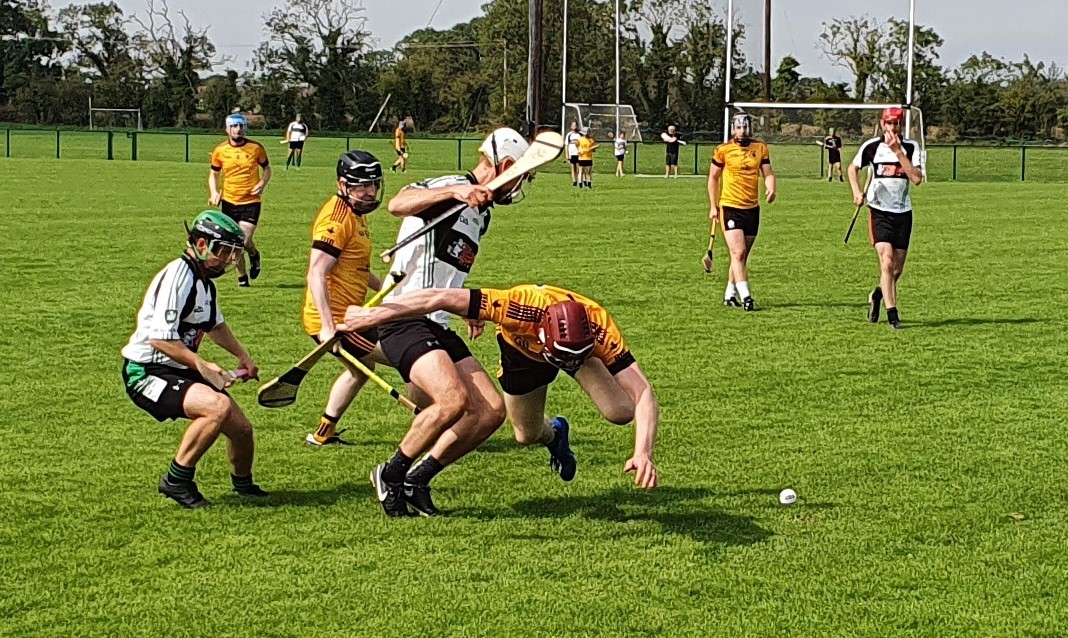 Sun 09th Aug 2020 – It was do or die for the St Brendan’s Hurlers, Sponsored by Luas Transdev, last Sunday as the team travelled to Robbie Farrell Memorial Park in Donabate, to take on a St Patrick’s Donabate side who were also winless in Group 3 of the Junior D Championship. The task was simple. Win, Win comprehensively, and hope that the challengers in the other Championship groups have a smaller winning margins and/or scoring difference.

Whatever Cian Walsh said to his team before the game had the desired effect because The Dark Force came out fighting like caged animals and were 5 points to no score up after 8 minutes with three free’s from Ciaran Ludden, two of which he drew the foul himself and points form play from Kieran Drea and Gavin ‘The Goal Getter’ Muldoon. Of Course, Muldoon’s shot was goal bound but deflected over by the hurl of the Donabate goalkeeper.

After the home side got their first score, Shane Foley’s first puckout was turned over, but Muldoon grabbed the Donabate shot with his bare hand and then from the spot, pucked the sliotar from 60 meters over the bar 0-6 to 0-1. Donabate hit a second point going into the first half water break.

Beforehand, Oisin Carley was fouled when in a good position and the free in occurred after the swig of the magic bottle, which Ludden promptly converted. The Donabate score remained low with excellent defending from Sean ‘The Dream Maker’ Dardis and Rochestown’s own Alan Walsh, who bungled the Donabate forward over the end line and wide.

A Ludden shot went wide, the puckout was won by Vincent O’Flynn, thanks in no small way with the sliotar bouncing off his helmet and pass to Shane ‘The Goal Poacher’ Muldoon who trumped his brother by getting the goal and increasing the scoring difference  1-7 to 0-2.

Gavin, did however, get back on the scoresheet with a point after a pass from Carley, but picked up a knock on the process, but the adrenaline of the match is what kept Muldoon going to the end of the half.

Another point, their fourth, followed for Donabate, Cian Walsh ordered his troops to keep the scores ticking over with another point, this time from the wing-forward Sean ‘The Pretty Boy’ Whyte after a Dardis turnover and long puck from Eanna Larkin. Trevor Purtill emerged with possession after a scramble and passed to Ciaran Ludden for another point 1-10 to 0-4.

Whatever Walsh’s concerns about conceding a late first half goal, eased big time when Ludden had a 20 meter free in, after a Whyte foul, and drove the free in low and into the net for a goal to ensure a healthy 12 point half time lead 2-10 to 0-4.

At Half time, word reached that in Group 2 (this match was in Group 3), that St Peregrines had put up a cricket score against Whitehall Colmcille, so the race was on for that elusive final Quarter Final spot.

Both sides traded points in the opening three minutes with Johnny Walsh getting the Dark Force score after good work from fellow midfielder Oisin Carley. The Pretty Boy Sean Whyte’s bid for a third goal ended when his shot went across the face of goal and cleared, the play moved upfield and Shane Foley in goal made an excellent save and got fouled in the process.

Gavin Muldoon had well shook off the knock he got in the first half to make it 2-12 when Foley, Alan Walsh and Padraig Pratt were all involved in the build-up and it was Pratt’s pass to Shane Muldoon then onto his brother, still envious of Shane’s first half goal, and his rasping shot went over the bar. Gavin then won the Donabate short puckout and punished the mistake with a point to make it 2-13 to 0-5.

The Goal Getter may not get a goal today but must settle for a hat trick of points after notching up a third consecutive point, again winning a short Donabate puck out. A Ciaran Ludden free in was dropped short and after a scramble the ball was cleared, St Brendan’s desperate for a third goal.

However, it was the home side who got the goal, after the second half water break after notching a brace beforehand, 2-14 to 1-7. Gavin Muldoon got a fourth consecutive point, this time from a free in after substitute Mick Kenaney tried to guide the sliotar over the end line for a 65, but got fouled in the process.

Five minutes to go, and St Brendan’s got a third goal after a shot from Ciaran Ludden from 60 meters fell short, but the sliotar hit the top of the goalkeeper’s right hand (we will give him the benefit of the doubt with the sun in his eyes) and tricked into the net, it may have been a bizarre goal but how important was that three pointer as far as scoring difference is concerned?

But there was plenty of time to increase the scoring difference with another point this time from Johnny Walsh, after a free in from the home side sailed wide and Ludden winning Foley’s puck out. Another Foley puckout was won my Padraig Pratt and pass to The Pretty Boy Whyte and onto Gavin Muldoon, still desperate for that goal, but settled for another point and a personal tally of 0-8 for the afternoon.

Full forward Kieran Drea finally got on the scoresheet, or saving the best til last in his words, with a point after Johnny Walsh won the Donabate puck out. 3-18 to 1-7 which was the final score.

Now the fun starts and the calculators came out. In Group 2, St Peregrines defeated Whitehall Colmcilles 2-22 to 2-5, leaving the Blanchardstown outfit on a scoring difference of -1. After today’s game, St Brendan’s had a scoring difference of +1, and with third place in Group 1, O’Toole’s on -30, it meant The Dark Force will be in the Quarter Finals and after that excellent performance today, confidence will be high going into the Quarter Finals on August 23rd, Opposition To be Announced.