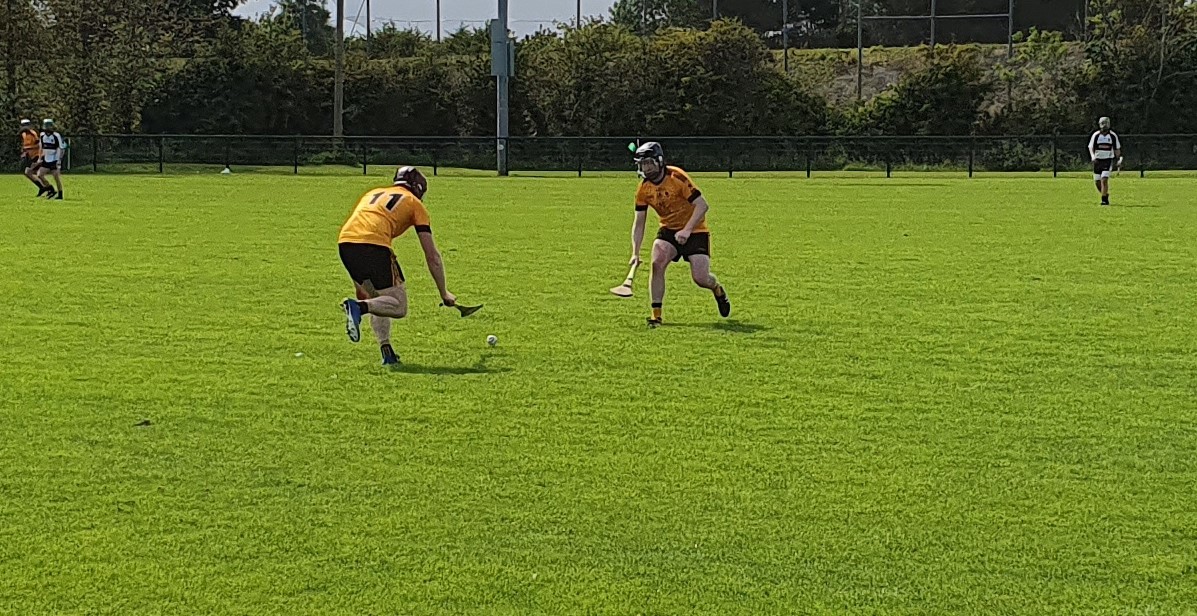 Published: about 1 year ago

In a blissfully hot Sunday morning in Grangegorman, The St Brendan's Hurlers, Sponsored by Transdev, entertained St Patricks Donabate, still searching for the first win of the 2021 season.

However, before we go any further, let's have a look back to other games played by St Brendan's in the past number of days.

On July 6th, the Mens Football 1st Xv finally got their season back on track with a hard fought win over Cuala on a scoreline of 3-6 to 1-8 in a match best remembered for a spectacular flying block made by Colm Harte in an exact carbon copy of the block executed by fellow Castlebar Mitchell Paddy Durcan in the TV ad promotiong Sky Sports coverage of the GAA Championship.

Two days later on July 8th, The Football 2nd XV recorded their second victory of the season with a 0-12 to 0-10 victory over St Peregrine's

On July 11th, the Football 1st XV came crashing down back to earth when a depleated team, (only 15 players available) went down 4-12 to 1-10 to top of the table Thomas Davis.

July 12th, the 2nd Xv travelled to Kilbogget Park in Cabinteely and despite being six points down, salvaged a priceless League point in a 3-9 to 1-15 draw against Cabinteely.

July 14th, Finally, Both St Brendan's Ladies Football teams, after a turbulant season thus far, warmed up for their respective B and G Championships with wins over Scoil Ui Chonaill. Unfortunately for the Ladies 1st XV, that win was achieved by a walkover, but the 2nd XV recorded an excellect 3-9 to 0-3 victory over the Clontarf Road outfit, with Marina Kilduff getting the majority of the socres, Roisin 'Nothing Compares' Toomey and Dextro Energy Lorna Barton playing well in midfield while Aoife Brennan was player of the match.

So onto July 17th and the sweltering heat of Grangegorman and only 13 players were available today, with Ciaran Ludden resting an injury and thus guarding the dug out.

Despite the short numbers, The Dark Force showed plenty of heart in the opening few minutes when Sean Whyte won a turnover, passed to Gavin 'The Goal Getter' Muldoon was held back, Shane Foley pointed the free in.

1-1 to 0-0 was the score at the first half water break, with St Brendan's dominiting possession but could not convert the score, a Donabate shot was saved by Kevin Sammon for a 65, which went wide. Another sideline cut from Kieran Drea found Sean Whyte who from 55 yards out pointed the 2nd point of the morning.

It took 24 minutes for the away side to notch up their opening score with Route One Hurling. But St Brendan's ensured a five point gap with a point from Foley after being high tackled, A second Donabate followed after a turnover in the middle third.

A turnover from Trevor Purtill found Muldoon, who had to settle for a point after move did not turn out what he has hoping for but went for the safe option of a point. 1-4 to 0-2 was also the half time score but could have been more but a Muldoon shot went wide after Cathal Kenny won possession following a fluffed Donabate sideline cut. St Brendan's retreated to the shade under the trees during half time, a tactical decision perhaps?

The decision to go in the shade at half time worked the oracle in the second half when The Wexican Oisin Carley (complete with a Lee Chin esque Farmers Tan) pointed a free in after drawing a foul follwoing good work from Michael Harte. Donabate kept the margin to five with their third point 1-5 to 0-3.

After a Sean Whyte wide, Carley won the Donabate puckout and played a delicate pass to Michael Harte and pointed a sweet point and a six point lead. After a brace point points from a away side, Whyte made it 1-7 to 0-5 going into the second half Swig Of The Magic Bottle and doing so in the shady trees.

Whatever magic was in those St Patricks Donabate bottles had the desired effect as they beat Noel Lane for goal and a two point game and could have levelled matters but missed two successive free in's but both went wide however, but still managed a point from play nonetheless. 1-7 to 1-6.

The 13 men of St Brendan's renewed their efforts with 10 minutes to go and Gavin Muldoon hit a priceless point from play after collecting the slioter from a Harte blocked shot, Shane Foley restored the three point game with a point after collecting a Carley sideline cut, even the injured Ciaran Ludden was urging the slioter between the uprights and used rather colourful language to boot.

A seventh Donabate point followed which could have been a goal but Eoin O'Connor struck a Hollywood Ball intended for Gavin Muldoon, a furious Muldoon branded O'Connor 'A Moron' after conceding the point. Suitably fired up, Muldoon slotted another priceless point, when desparate for a goal. Foley then ensured a four point buffer for St Brendan's with a point after a hugly inportant clearance form Vincent O'Flynn and solo run from John Walsh.

Muldoon must have forgiven O'Connor before the game was out when a long ball was dropped into 'The Self Styled Goal King' but O'Connor was dragged onto the ground 20 meters from goal. A free in from where the ball landed close to the foul with Carley promptly converted.

In the final minute, we had the same situation we had in the Championship fixture between the two sides last August, except the other way round, when a long Donabate ball was dropped in, Noel Lane intended to catch, but the slioter got lost in his eyeline directly into the sun and the slioter bounced off his right hand and into the net, leaving St Brendan's with some anxious moments going into injury time.

But the referee called time 10 seconds into injury time, Noel Lane was 100% forgiven and St Brendan's finally had a win on the board, which sets up the team nicely going into the next League outing away to Round Towers Lusk on July 29th.