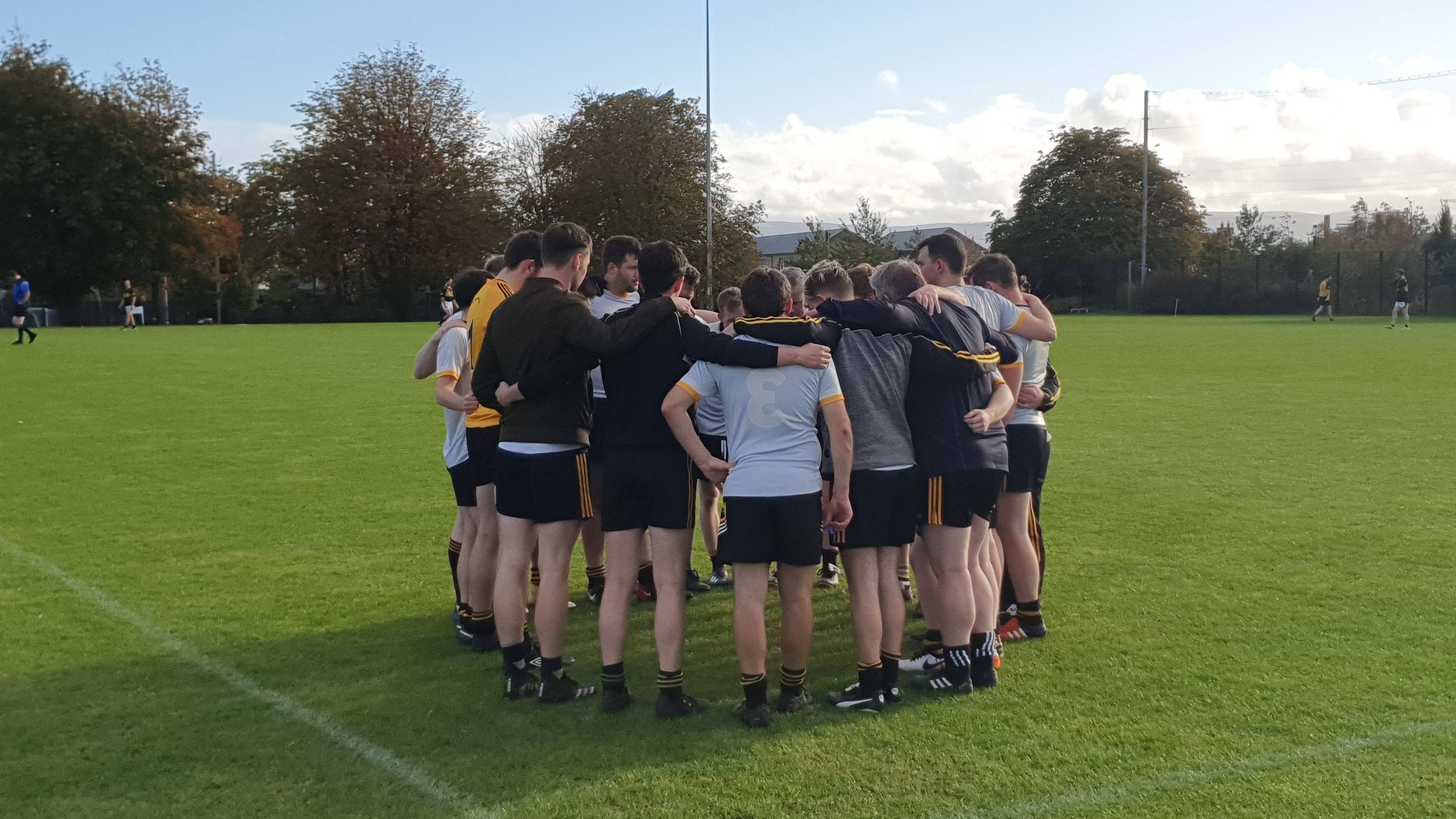 Like the 1st team this morning, the St Brendan's 2nd XV, in partnership with Stoneybatter Pride Of Place, also had absentees ahead of their Junior 5 All County Championship Quarter Final against Geraldine P Morans in Grangegorman. Again, many players had prearranged plans for the October Bank Holiday weekend and simply didn't foresee any GAA activity that weekend, which is a pity because Dublin GAA traditionally don't plan games on Bank Holiday weekends, except, for some reason, in October!

Due to a colour clash, it was St Brendan's who had to turn the jerseys inside out, with the 1sts using the Amber jersey's this morning. Geraldine P Moran's, wearing pre 2008 jerseys with the old GAA logo, opened the scoring with a point after Brian Hobbins had a free in that sailed wide. A shot by Malachi Doyle was saved by the Morans goalkeeper and cleared, but Bradley Skerritt turned over the ball in the middle third and worked its way back to Hobbins to kick the equalising score and The Darkest Force's 1st score of the Quarter Final.

After a Moran's shot went wide, Ciaran O'Shea's kickout was played short to Colin Folan and it was Hobbins again with the score from play to give St Brendan's the lead, but not for long as the away side hit their second score to make it two points each. St Brendan's retook the lead before the first half water break when Hugh Bannon won a kick out from a Mark, played he ball to Marcus Brady before returning the ball back to Bannon who got fouled in the process, Up stepped Brian Hobbins with a Jonny Wilkinson style of kicking from the ground to strike over the bar before drawing water.

Whatever Billy Kelly said, or even put in the water bottles had the desired effect as St Brendans went on a purple patch with a great passage of play involving Folan and Doyle and it was Marcus Brady, with the luxury of the advantage, who didn't need it and kicked a great score. John Tuffy sold a great dummy to the Moran's defence before passing to Hugh Bannon and the shot over the bar.

We very rarely see the Advanced Mark used in the lower grades of Junior Football, but John Tuffy made the most of the Advance Mark rule not once put twice, Firstly Tuffy won the Advance Mark after a long pass from Malachi Doyle for the sixth point, and the second the two combined again after Bradley Skerritt won a brilliant turnover and Tuffy managed to raise his hand at the last possible moment to notify of the Advance Mark and promptly converting what was St Brendan's 8th point.

In between Tuffy's points, a Moran's free in fell short and Ciaran O'Shea punched the ball clear to Padraig Pratt and onto Tommy O'Donnell and it was Hobbins again with the point. Hobbins rounded off the half when another Colin Folan clearance, John Tuffy again involved to supply the final pass to Hobbins for the point and a 0-9 to 0-3 lead for the home side at half time.

3:43 gone in the second half and Brian Hobbins picked up where he left off in the first time by pointing a free in after a foul on Hugh Bannon. However, St Brendan's had to make do with 14 men for the next ten minutes after Dave Ryan was sent to the sin bin after a cynical foul, which Moran's promptly converted to make it 0-10 to 0-4.

The away side suddenly found their feet and hit a brace of points in that ten minute period and no sooner had Dave Ryan returned to the field, Geraldine P Morans went down to 14 players for the rest of the match after a foul on John Tuffy.

Tuffy ended St Brendan's 14 minutes scoring drought by scoring a point in which the two substitutes, Sean Dardis and John Ryan, were involved. Moran's were finding their feet and sensed a sensational victory when beating Ciaran O'Shea for a goal to put one between the sides 0-11 to 1-7.

O'Shea kept St Brendan's in the match with a point blank save for a 45, which went wide, but a St Brendan's player had his foot inside the D during the kick out and a free in ensued which was promptly converted by Geraldine P Morans to level the tie and looked like sending the match to extra time, but John Ryan bid to win the game at the death ended when his shot feel short. The referee blew for full time and there was going to be extra time.

How much drama can St Brendan's take for the third consecutive weekend?

So extra time and two minutes into the first period of extra time there was a lengthy injury to a Morans player who had to be taken off. The away side were back to their full complement of 15 players for the extra time period.

Ciaran O'Shea had an opportunity to put St Brendan's back in front when trying to unleash his inner Stephen Cluxton with a free in from 50 meters out after a foul on Trevor Screeney, but unfortunately the free in fell short and Geraldine P Morans made a break upfield as both O'Shea and Malachi Doyle sprinted to protect the goal line. Doyle got there first and Moran's attack yielded a point to lead the contest for the first time.

That was the only score of the first period because Brian Hobbins saw a 45 fall short and cleared. The second period of extra time and St Brendan's went on the attack, however, the final shot let the forwards down and registered 4 wides in that period. Morans did not have a shot at all in that ten minute period and that sole first period point was enough to win the tie as the referee blew the final whistle at 5pm to end St Brendan's 2nd XV's 2021 season.

Utter heartbreak for The Darkest Force who had genuine credentials to win the Junior 5 Championship but ran out of legs and steam in the end, but again, it was a matter of What If? had this not been a Bank Holiday Weekend with so many players unavailable. Still A Quarter Final appearance is no mean feat and the 2nd XV have something to work on in 2022.

Also today, The St Brendan's Ladies Football 1st Xv were also in action when the team played their first competitive fixture since the Junior B Final defeat on September 8th when the team traveled to Ballyboughal in Ladies Division 3.

The Reason for the long period of inactivity was that The Female Dark Force are the only Junior B team in Division 3 whereas the other teams are in Junior A and played their championship later in the year than Junior B. But like both Mens Football teams, the Ladies 1st XV were also depleted of players due to the Bank Holiday weekend and were beaten comprehensively.

St Brendan's Ladies have four games left in Division 3 against Junior A opposition, Raheny (October 31st), Naomh Barróg (November 7th), Clontarf B (November 14th) and St Jude's (November 28th). No doubt some tough tests for the team if they are to maintain Division 3 Football and even a move to Junior A in 2022.

This past weekend felt like the U-8s were finding their ...

The Girls are BACK

Time to change the car?

It’s that time of year again, when you can buy a ticket(s...

This is the best fun I’ve ever had

This has been one of the busiest and best weekends our U...

Welcome to the Neighborhood! - Workday

St. Brendan's GAA club of Grangegorman is getting new ne...

To all Ukrainian families arriving in Dublin. St. Brend...