A big day in young lives 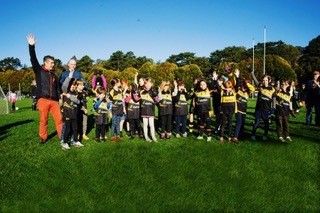 It’s was a big day for the U-7 boys and girls as well as St Brendan’s GAA club on Saturday morning when the fledgling GAA players stepped foot on their first competitive GAA pitch. The excitement started from early on when the kids received their St Brendan’s jerseys for the first time. They had their first photo taken as a team just before throw at 11AM. The opposition on the day was the west Dublin club St Peregrines who were warmly welcomed to Longmeadows. In the photo with the young team was Nettraffic Ltd's Managing Director, Cíarán o Broin. Nettraffic deserve great credit for their support at this important time in these young player's lives.

It was an exciting morning with awards and mementos for the kids on their special day and an ice cream van appeared at one stage. The nursery training was also moved to Longmeadows so that the kids and parents could cheer-on the Under 7s and make it a real party event.  There were 100 pumpkins for all the kids as gifts and a pop-up hurling shop for any parent who wanted to purchase gear for their kids.  It was a major milestone for the club and for the boys and girls and we wish them well at the start of what we hope will be a long and fun filled time playing GAA career for St Brendans.

This past weekend felt like the U-8s were finding their ...

The Girls are BACK

Time to change the car?

It’s that time of year again, when you can buy a ticket(s...

This is the best fun I’ve ever had

This has been one of the busiest and best weekends our U...

Welcome to the Neighborhood! - Workday

St. Brendan's GAA club of Grangegorman is getting new ne...

To all Ukrainian families arriving in Dublin. St. Brend...