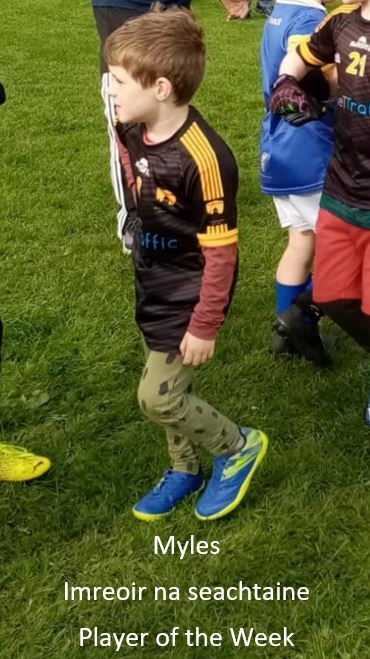 Saturday was a good day. It was a day that epitomized team spirit and generosity. The U8 boys took on rivals Castleknock in 2 very competitive matches. The lads played very well. The games had everything , tight marking, lots of excitement and tons of scores. All our players had good games and some even had great ones. Super goalkeeping from Daniel, strong defending from Devin, Samuel and Oscar. Strong midfield performances from Leo, Crean and Sibhéal among others and top notch performances up front from Danny, Max and Maxo.

Ranu deserves special mention. Our newest player and a real jewel as he showed with some great passing and scoring today. We are delighted to have him.

Some stand out kids for special mention this week. Maxo who in the last few weeks has taken a major step forward. He scored a wonder goal as he chipped the keeper at the back post. Samuel for keeping all opponents from our goal (I don’t think there was a prouder Dad than Thomas there today). Liheng for getting stuck in on the tackles and Leo for coming back after a training injury on Thursday night to give his team a major boost.

Our player of the week is Myles however. Castleknock were down a few players and he was the first player to put his hand up and volunteer to pull on an opposition jersey in a display of sportsmanship that belies his young years. I felt very proud when I saw him but up his hand and volunteer to even things up. At the end of the day win lose or draw its actions like that which make us proud of these kids. His parents should be proud.

It was a big week for this group. They have played and trained together now for 2-3 years. After discussion with our GPO and coaches we have decided that there is a strong need for an U7 team and Daragh, Gus, Myles, Leon, Henry, Failey, James, Ted, Liheng and Daniel will be the foundation stones of this new team. They will train alongside the U8s for the foreseeable future under Gerry’s watchful eye but will start playing their own matches in the future.

They need a proper chance to grow and develop and the future is bright.

Best of Luck to our Adult Hurlers In the Championship Fin...

Spooked by having the kids at home this mid-term?

Spooked by having the kids at home this mid-term?You know...

Booking for our Halloween Camp is now open! Book now to a...